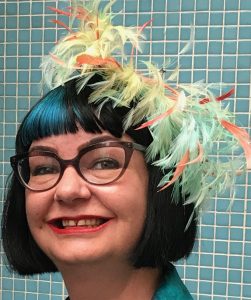 I hatched Stop The Pigeon in 2002. I am from Salford and live in Manchester, England. I work peripatically across the UK and internationally. I have a rich portfolio including project management; communications consultancy; facilitation; training and coaching, transferable across sectors. My mission is to enable effective communications for people and companies including executive teams; boards; staff and stakeholders to explore and realise personal and organisational ambitions.

My current client 2022 is Leeds2023, where I am working with others in the team on Audience Development Plans for the amazing projects and events in the Year of Culture.

From March 2020 – April 2021, I worked with Europia during the initial phases of lockdown due to COVID-19. I project managed the development and release of the website to be as accessible as possible, and dyslexic – friendly. This makes perfect business sense – what is kept simple can be accessed by more people and also people for whom English is a second language. Working with an international team, we developed online communications in over five Eastern European languages.

In 2015, I was one of four British Council ‘Canny Creatives’ working in Batumi, Georgia. Supporting four state-funded performing arts organisations to develop sector skills in marketing and audience development.

Former major contracts have included in 2013/2014 for Glasgow 2014 Commonwealth Games as Project Manager – Ceremonies, Culture and Queen’s Baton Relay; and with The University of Salford in the Marketing and Communications Team as Special Projects Manager, Creative Marketing Services.

I have over twenty five years’ experience and have been part of senior teams to launch several major performing arts organisations across the UK. Strategic communications work includes the launch of Cast a new £21m performing arts venue in Doncaster which opened in September 2013;  The Core at Corby Cube part of a £30m new build project in 2010 and Lead Communications Consultant with National Theatre Wales  during 2009/2011, believed to be the first national cultural organisation in the UK to launch with an online community and live global digital broadcast.

I have been a regular facilitator and coach on Short Courses and Board Development with the Clore Leadership Programme, strengthening leadership in the cultural sector and keeping abreast of sector challenges.

I was awarded England’s North West Fellow on the Clore Leadership Programme 2007/2008.

I am a Fellow of the Royal Society for the Arts Manufacturers and Commerce (FRSA); a Prince 2 Project Management Accredited Practitioner and International Member of the Association for Coaching (MAC).

My personal ambition is to share the knowledge and skills I offer, for personal and company development, and ideally be invited to work across the UK and the world.